After WWII ended, the sales of knives for Randall dropped dramatically, particularly fighting models. Bo began the transition to produce more field knives at the end of the war which became the predominate seller. But with occupation after the war, there was still a demand to some degree for fighting knives, albeit small. This demand increased as the decade closed and tensions rising on the Korean peninsula.

I believe most of us have an image of what a trench knife is, that being a stiletto type blade with a handle with finger grips. Some trench knives had hand guards which are often referred to as a “D” guard, and which completely went around the hand while holding the knife. Some even had “spikes” added to the guard to inflict additional damage in hand to hand combat. I suppose this was done in the event the blade did not cause enough damage alone. There were several manufacturers of trench knives during WWII, theater made examples, plus a couple of “custom” makers that produced some that fetch very high prices in the collector market today. Randall Made did not produce a trench knife as a cataloged model, but an argument could be made that the subject knife fits the criteria of what we commonly look upon as an example of the genre.

Bo Randall produced a only a few standard models during the WWII period and this number has grown quite a bit since that time. Post war, Bo was more inclined to produce special orders at a customers request, and while some were one offs, some were simply standard models with uncommon configurations or options. The latter is what we have with the model 2 that is the topic of this article.

I believe this knife was produced in the latter half of 1940’s. It has a nickel silver hilt, which of course was introduced in 1948. The stag handle has the deep finger grips common in earlier Randall’s. The duralumin butt has a chamfered thong hole and is topped off with a brass nut and brass washer, still common during the 1940’s. Seven spacers was the standard fare on non-leather handles by this time.

The 8 3/8” blade is broader than most at almost 1 3/8” at it widest point. It is quite imposing in size. The blade also has the small stamp, started in 1945. Initially WWII model 2’s had the stamp on the blade because there was little if any ricasso available to stamp them in the traditional location. By mid to late 1944, the grind had evolved enough to allow logo stamping on the ricasso. Although the stamping had moved to the traditional location, there generally wasn’t enough space in the abbreviated ricasso of the period to accommodate the use of the large Randall Made stamp in its entirety. In other words, quite often the ricasso placed stamp was “incomplete” with portions lost to the grinding wheel and final polishing. With the introduction of the smaller RMK stamp for use on smaller field knives, the switch was made also on the model 2.

So what we have is a superb example of a 1940’s model two with the idea of taking this piece into combat at the forefront of the original customer’s thoughts. It suits the role well, and I would hate to be on the receiving end of its intended use. 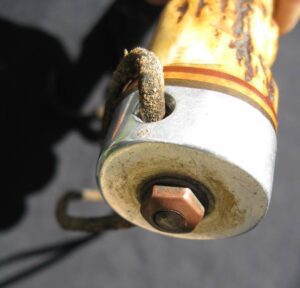